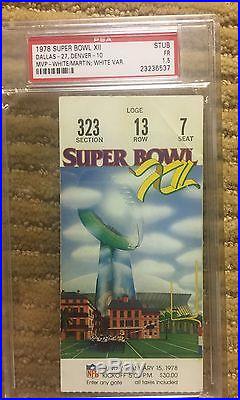 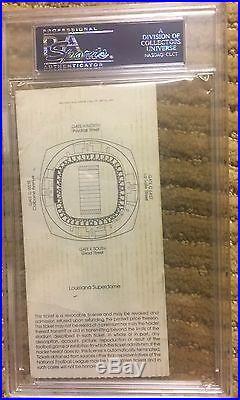 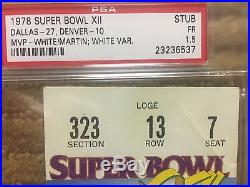 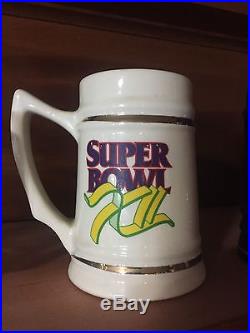 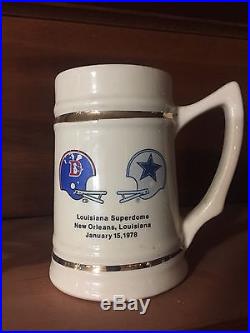 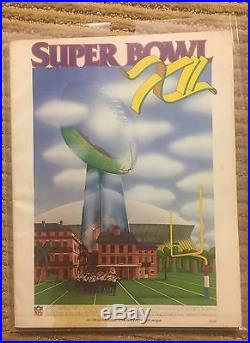 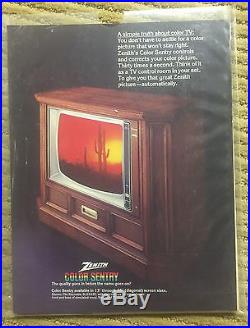 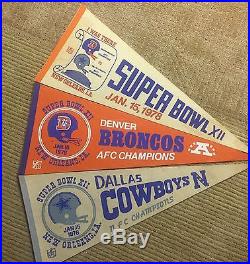 1.5 graded good ticket stub from Super Bowl 12. Only 97 Super Bowl 12 ticket stubs exist in in the PSA registry in a-n-y grade or color variety. NO "9s" and NO "10s" are known... Which means this piece is a truly rare high-grade collectible. - Do you know how many Cowboys fans would l-o-v-e to own this Ticket display, if they knew that it existed?

-- It's a great vintage (38 year old) collectible and these have proven to be very good investment-grade pieces! Also included in this package is a Rare and Hard to Find SUPER BOWL 12 XII GAME PROGRAM Cowboys Broncos. And a Super Bowl mug/decanter to complete the set along with three Pennants from the game. Below are some game stats...

Super Bowl XII was played between the National Football Conference (NFC) champion Dallas Cowboys and the American Football Conference (AFC) champion Denver Broncos to decide the National Football League(NFL) champion for the 1977 season. The Cowboys defeated the Broncos 2710 to win their second Super Bowl. The game was played on January 15, 1978, at the Louisiana Superdome inNew Orleans, Louisiana. This was the first time that the Super Bowl was played in a domed stadium, and the first time that the game was played in prime time. The game pitted Cowboys quarterback Roger Staubach against their former quarterback, Craig Morton. Led by Staubach and the Doomsday Defense, Dallas advanced to its fourth Super Bowl after posting a 122 regular season record and playoff victories over the Chicago Bears and theMinnesota Vikings. The Broncos, led by Morton and the Orange Crush Defense, made their first Super Bowl appearance after also posting a 122 regular-season record and postseason wins over the Pittsburgh Steelers and the Oakland Raiders. The Cowboys defense dominated most of Super Bowl XII, forcing eight turnovers and allowing only eight pass completions by the Broncos for just 61 yards. Two of those interceptions led to 10 first-quarter points.

Denver's longest play of the game was just 21 yards, which occurred on their opening drive. Dallas expanded its lead to 203 in the third quarter after wide receiver Butch Johnson made a diving catch in the end zone for a 45-yard touchdown reception.

Denver cut the lead down to ten, 2010, after an ineffective Morton was replaced by Norris Weese late in the third period, but the Cowboys put the game out of reach in the fourth when fullback Robert Newhouse threw a 29-yard touchdown pass on a halfback option play to receiver Golden Richards. For the first and only time, two players won Super Bowl MVP honors: defensive tackle Randy Whiteand defensive end Harvey Martin.

This was also the first time that a defensive lineman was named Super Bowl MVP. The item "PSA 1.5, RARE Super Bowl XII Ticket, Program, Mug, Pennants, Cowboys/ Broncos 1978" is in sale since Thursday, January 4, 2018. This item is in the category "Sports Mem, Cards & Fan Shop\Vintage Sports Memorabilia\Ticket Stubs". The seller is "duddy2003" and is located in Wheeling, West Virginia.

This item can be shipped to United States.