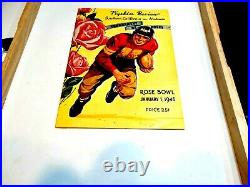 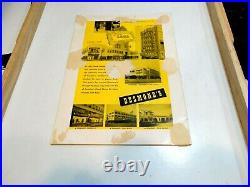 This is the program (Pigskin Review) for the 1946 Rose Bowl between the University of Alabama and the University of Southern California. The program has 40 pages and measures approximately 7.75 x 10.75 inches. There is information about both teams, their players and coaches, the universities, the Rose Bowl, etc. There are black & white photos of the players and coaches; there are also vintage color and black & white advertisements. The 1945 Alabama Crimson Tide football team (variously Alabama, UA or Bama) represented the University of Alabama in the 1945 college football season.

It was the Crimson Tide's 51st overall and 12th season as a member of the Southeastern Conference (SEC). The team was led by head coach Frank Thomas, in his 14th year, and played their home games at Denny Stadium in Tuscaloosa, Legion Field in Birmingham and at the Cramton Bowl in Montgomery. They finished with a perfect season (10-0 overall, 6-0 in the SEC) and with a victory in the Rose Bowl over USC. This team was the second season of the "War Babies" as coined by head coach Thomas. The Crimson Tide opened the season on the road with a victory over Keesler AAF after Jackson Army Air Base canceled their game at Denny Stadium.

Alabama then defeated LSU in Baton Rouge before their first home win of the season at the Cramton Bowl over South Carolina. After victories over both Tennessee and Georgia at Legion Field, the Crimson Tide routed both Kentucky and Vanderbilt on the road to extend their record to 7-0. They then closed the season with a pair of games at Denny Stadium where they defeated the Pensacola NAS and Mississippi State to complete an undefeated regular season. One month later, Alabama won the Rose Bowl over USC to finish the season undefeated.

The 1945 season was the fourth perfect season in Alabama history, following the perfect seasons of 1925, 1930 and 1934. However, Alabama did not win the national championship in 1945; that honor went to the Army Cadets team that went 9-0 and outscored its opponents by a 412-46 margin. The Crimson Tide finished second in the AP poll behind the Cadets. The NCAA recognizes consensus national champions as the teams that have captured a championship by way of one of the major polls since the 1950 college football season, and prior to 1950, they were chosen by a variety of selectors. For the 1945 season, Army was recognized as national champions.

The 1945 Alabama team was later determined to be national champions by the National Championship Foundation; however, Alabama does not claim 1945 as one of its 17 recognized national championships. The 1945 USC Trojans football team represented the University of Southern California in the 1945 college football season. In their fourth year under head coach Jeff Cravath, the Trojans compiled a 7-4 record (5-1 against conference opponents), won the Pacific Coast Conference championship, lost to Alabama in the 1946 Rose Bowl, and outscored their opponents by a combined total of 205 to 150. The item "Alabama-USC 1946 Rose Bowl Football Program" is in sale since Saturday, October 3, 2020.