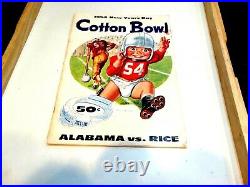 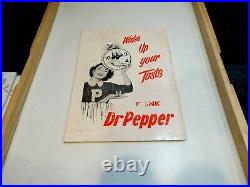 The program contains information and black & white photos about both teams and their coaches, statistics, information about the Cotton Bowl Classics history, etc. There are also vintage advertisements. The 1953 football season was the Alabama Crimson Tides 59th overall and 20th season as a member of the Southeastern Conference (SEC). The team was led by head coach Harold Red Drew, in his seventh year, and played their home games at Denny Stadium in Tuscaloosa, Legion Field in Birmingham, Ladd Stadium in Mobile and at the Cramton Bowl in Montgomery, Alabama. They finished with a record of six wins, three losses and three ties (6-3-3 overall, 4-0-3 in the SEC), as SEC Champions and with a loss against Rice in the Cotton Bowl Classic.

1953 was one of the more unusual seasons in Alabama history. After they opened the season as the preseason No.

5 team, the Crimson Tide lost to Mississippi Southern and tied LSU before they earned their first win of the season against Vanderbilt in week three. Alabama won only six games all year, and only four of seven conference games. However, the other three conference games were ties, and a 4-0-3 record was good enough to win Alabama the SEC title.

It was Bama's first conference championship since 1945 and last until 1961. For their championship, Alabama accepted an invitation to play in the Cotton Bowl Classic. In the match-up against Rice one of the strangest plays in the history of college football occurred. In the second quarter, Rice had the ball on its own five-yard line up 7-6 after recovering an Alabama fumble. On their first play of the drive, Rice running back Dicky Moegle swept around the right side, broke free and appeared to be on his way to a 95-yard touchdown run until Tommy Lewis of Alabama, who was on the sideline, ran onto the field of play and tackled Moegle at the Alabama 40. Officials awarded Moegle a 95-yard touchdown run, and Rice won the game 28-6. In 1953 the Rice Institute (it became Rice University in 1960) football team (the Owls) were led by 14th-year head coach Jess Neely and played their home games at Rice Stadium in Houston, Texas. The team competed as members of the Southwest Conference, winning a share of the conference title with Texas with a 5-1 conference record. Rice finished the regular season with an 8-2 record overall and were ranked 6th in the final polls, which were conducted before bowl season. Rice was invited to the 1954 Cotton Bowl Classic, played on New Years' Day, where the Owls defeated SEC champion Alabama. Of those players on the two teams, 14 members of the Alabama Crimson Tide team and 15 members of the Rice Owls were drafted by the NFL in 1954/55/56. Of those, two became members of the NFL Hall of Fame quarterback Bart Starr of Alabama and Dickey Moegle, the Rice running back. The item "Alabama/Rice 1954 Cotton Bowl Classic Football Program 1/1/1954" is in sale since Wednesday, November 11, 2020.