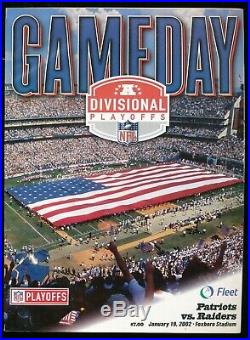 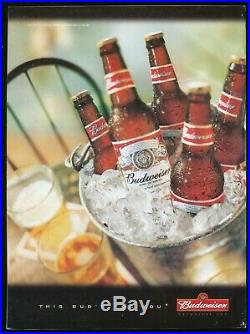 January 19th, 2002New England Patriots vs the Oakland Raiders from Foxboro Stadium. Probably the most memorable game in Foxboro/Patriots Home History. We all know the Patriots won 16-13 in OT. And of course this game had everything from snow to controversy to incredible kicking and Tom Brady's first ever post season win. And the last game ever played in the old Foxboro/Sullivan/Schaefer Stadium. What a way to go out for the cheapest NFL stadium ever built. The program is only EX because it is fairly wrinkled.

Because it had to endure a snowstorm the entire game. But the spine is tight and there are no rips and tears.

Considering it spent 4+ hours in the elements of the night, it is in not bad condition. The item "2002 1/19 New England Patriots Raiders Playoff Program Tuck Rule Snow Bowl(PL)" is in sale since Saturday, February 8, 2020. This item is in the category "Sports Mem, Cards & Fan Shop\Vintage Sports Memorabilia\Publications\Programs\Football - NFL".

The seller is "patsne59" and is located in Owatonna, Minnesota. This item can be shipped to United States.