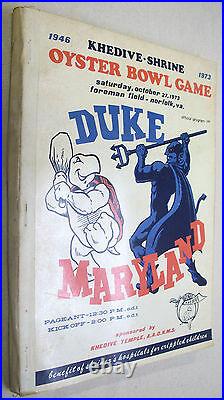 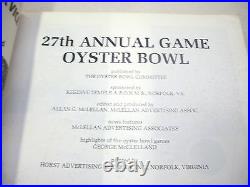 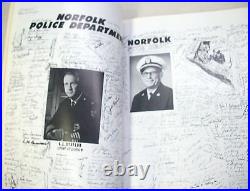 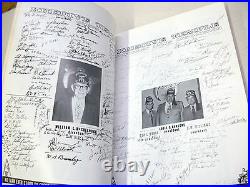 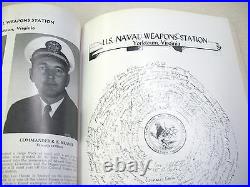 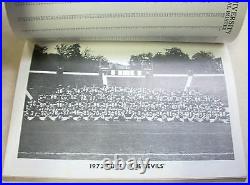 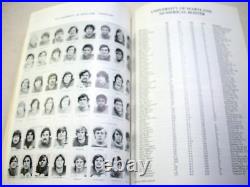 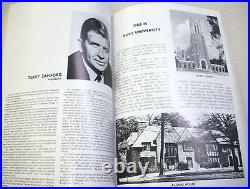 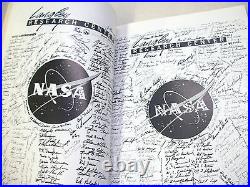 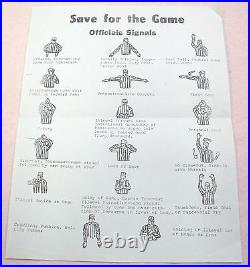 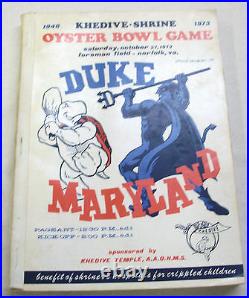 Mabucks Curiosities has a deal for you today. We offer this extremely rare softcover 1973 edition program of Khedive-Shrine Oyster Bowl Game: Duke Vs. Maryland, sponsored by the Khedive Temple. These games were played for the benefit of Shriners Hospitals for Crippled Children.

Dust Jacket: No dust jacket. Cover: Softcover - Moderate to heavily soiled white semi-gloss paper w/ a Duke Blue Devil and a Maryland Terrapin squaring off on front and a Coca-Cola advertisement on the back. Spine stapled program w/ soiled white tape covering the staples. The tape is beginning to peel loose and fray at several places, but the program is still firmly stapled. Foxing and soiling spots are evident on the outside and inside of the covers. Corners and edges have light bumping w/ a small amount of curl beginning at the corners. Pages: 314 pages; white gloss paper. Outer edges have light moderate soiling and foxing.

Some of the pages have light foxing or soiling in the outer margins, but it does not interfere with the text or photographs. No writing, highlighting or underlining are evident.

Pages are flexible, legible, and still firmly bound together. Description: This is a HUGE program for the 1973 Oyster Bowl Game. This game was between Duke and Maryland with Maryland defeating Duke 30 to 10.

They squared off again in the 1974 Oyster Bowl with Maryland again spanking Duke 56 to 13. This program was for the 27. Annual benefit game of Saturday, Oct. 27, 1973 at Foreman Field in Norfolk, Va. The book is full of local Norfolk advertisements and supporters of the games.

Bethel 49 International Order Jobs Daughters - Parksley, Va. Other supporters in the way of advertising include. First Federal Savings and Loan. And many, many more including local small businesses! There are many letters from local leaders that are included in this program. Wingerter - Imperial Potentate of Nobles of the Mystic Shrine. Illustrious Potentate of Khedive Temple. Harvey Beffa - Board of Trustees Shriners Hospitals for Crippled Children. Linwood Holton - Governor Va. Mayor City of Norfolk, Va.

Northampton-Accomack Memorial Hospital, Nassawadox, Va. As an added feature, included in the book is a sheet of Officials Signals that says "Save for the Game".

On the back of this sheet is an article from the Richmond-Times Dispatch entitled "Howell on Busing", dated Oct. As you can see, theres plenty to look at, read, and treasure in this rare piece of sports history. A must-have for any Duke Blue Devils or Maryland Terrapins fan, or for the collector of Oyster Bowl memorabilia! The item "1973 Khedive-Shrine Oyster Bowl Game Norfolk VA Duke Maryland Program X-RARE" is in sale since Monday, April 15, 2013. This item is in the category "Books & Magazines\Antiquarian & Collectible".

The seller is "mabuck8" and is located in Burlington, North Carolina. This item can be shipped to United States.