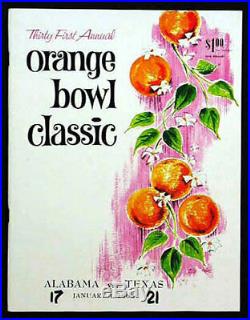 We take pride in our packaging. 1965 Orange Bowl RARE Texas Alabama Football Program Joe Namath Bear Bryant. >condition: Fine (Score written on cover) Texas Orange Bowl Champs Joe Namath This was first night game in bowl history and matched two legendary programs vying for a national title. It contained plenty of drama with Bama QB Joe Namath not expected to play because of a knee injury, not starting and still winning the game's MVP award in a losing effort. Still, that was nothing compared to the way this one unfolded in the fourth quarter, when a controversial call finished off a legendary Texas goal-line stand. After the Longhorns stuffed Alabama on three straight runs, Namath was denied on a QB sneak that some believe should have netted the Tide seven points and the game. Alabama won the National Championship that year due to the final regular season poll. King Gallery - Since 1971 - Specializing in Rock Concert Posters and Sports Memorabilia Can't find it? We have over 6,000 rare and unusual items listed for sale on our website.

Dennis King is the co-author and art director of Art of Modern Rock: The Poster Explosion. He is also the author of Art of Modern Rock Mini #1: A-Z and Art of Modern Rock Mini #2: Poster Girls. He is an internationally recognized authority on vintage and contemporary rock posters, screenprints, early sports collectibles, and Japanese pop culture memorabilia. He maintains one of the largest private rock poster collections in the world and is regularly called upon by publications, libraries and collectors worldwide for examination and appraisal services.