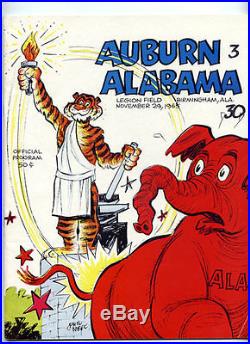 60's Postcards and Handbills. Rap and Hip Hop Posters. We take pride in our packaging.

The Crimson Tide won the 1965 Iron Bowl and once again won a national championship but this time the Associated Press voted after the bowl games and it took a 39-28 Tide win over Nebraska in the Orange Bowl to put Bama at the top of the poll. Auburn, after a 30-3 loss to the Tide, went on to the Liberty Bowl. Condition: Fine (scrore written on cover) All items are originals in near mint or better condition unless otherwise indicated.

King Gallery - Since 1971 - Specializing in Rock Concert Posters and Sports Memorabilia Can't find it? We have over 6,000 rare and unusual items listed for sale on our website. Dennis King is the co-author and art director of Art of Modern Rock: The Poster Explosion.

He is also the author of Art of Modern Rock Mini #1: A-Z and Art of Modern Rock Mini #2: Poster Girls. He is an internationally recognized authority on vintage and contemporary rock posters, screenprints, early sports collectibles, and Japanese pop culture memorabilia. He maintains one of the largest private rock poster collections in the world and is regularly called upon by publications, libraries and collectors worldwide for examination and appraisal services. He is also a highly respected authority on early sports cards and has been featured in numerous publications both in the United States and in Japan.

In 1977 he opened King's Baseball Cards, the first full time sports memorabilia store in California. Please visit us at D. King Gallery if you are in Berkeley, just a 15 minute BART ride from San Francisco. _gsrx_vers_631 GS 6.9.8b6 (631). The item "1965 Iron Bowl RARE Alabama Auburn Football Program Ken Stabler Orange Champs" is in sale since Wednesday, May 23, 2018.