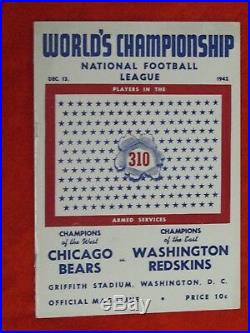 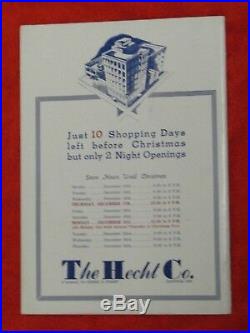 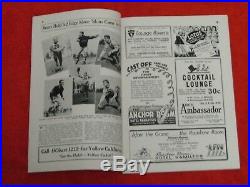 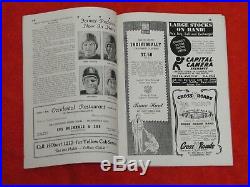 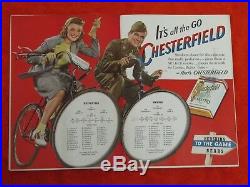 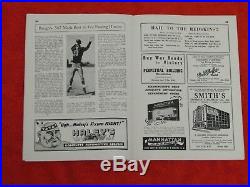 Listed is a 1942 NFL CHAMPIONSHIP PRE SUPER BOWL PROGRAM CHICAGO WASHINGTON RARE NR MINT. 1942 NFL CHAMPIONSHIP: SWEET REVENGE Two years earlier, the Chicago Bears had crushed the Washington Redskins, 73-0. If anything, this edition of the Monsters of the Midway was even stronger, having rolled through a season of eleven straight one-sided wins.

Their lowest margin of victory was 14 points. Oddsmakers made them as much as 20-point favorites to continue their mastery over the'Skins. Signs posted in the Washington dressing room urged the players to remember the 73-0 humiliation. Reminders were unnecessary; the players who'd been with the team then would never forget.

The first quarter was scoreless -- certainly an improvement for Washington over the 1940 game. But a little over a minute into the second quarter, Bears tackle Lee Artoe scooped up a Redskins fumble and rambled 52 yards for a touchdown. Although he missed the extra point, it looked like the beginning of another rout. Midway through the quarter, Sammy Baugh hit Wilbur Moore on a 39-yard touchdown pass. Bob Masterson's successful PAT gave the Redskins a 7-6 lead at the half.

The Redskins continued to hold off the more and more frustrated Bears in the second half. In the third quarter, Washington put on an 80-yard drive with fullback Andy Farkas carrying the ball on ten of twelve plays. His tenth carry was for only one yard but it put him in the end zone. Masterson added his second PAT to make the score 14-6.

Despite the Bears best efforts, they couldn't get untracked in the final quarter, and Washington had its revenge for the 73-0 game. Instead of a replay of the 1940 championship game, this one was most like the 1934 title tilt when another perfect Chicago season was ruined by an upset loss in their final outing. But in that famous tilt, the Bears were bested by a combination of an icy field and basketball shoes worn by their opponent. This round, their defeat could only be blamed on a determined Redskins effort. December 13, 1942 Attendance: 36,006 WASHINGTON REDSKINS 14 CHICAGO BEARS 6 ------------------------ -------------------------- Bob Masterson LE Ed Kolman Willie Wilkin LT Bob Nowaskey Dick Farman LG Danny Fortmann Ki Aldrich C Bulldog Turner Steve Slivinski RG Ray Bray Bill Young RT Lee Artoe Ed Cifers RE George Wilson Ray Hare QB Sid Luckman Sammy Baugh LH Ray Nolting Ed Justice RH Hugh Gallarneau Andy Farkas FB Gary Famiglietti Washington Redskins......

100% COMPLETE , NICE INVESTMENT FOR COLLECTORS. VERY NICE PIECE OF RARE VINTAGE MEMORABILIA THAT WOULD MAKE A TERRIFIC ADDITION TO ANYONE'S COLLECTION. THANK YOU FOR YOUR INTEREST AND BEST OF LUCK. PLEASE SEE MY OTHER AUCTIONS FOR RELATED VINTAGE AND RARE ITEMS. The item "1942 NFL CHAMPIONSHIP PRE SUPER BOWL PROGRAM CHICAGO WASHINGTON RARE NR MINT" is in sale since Tuesday, July 23, 2019.