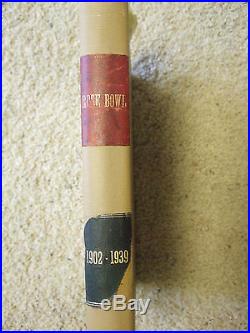 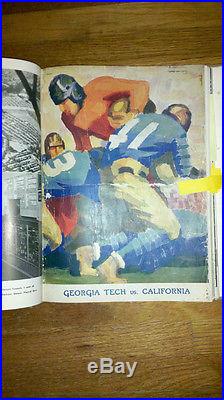 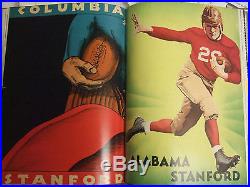 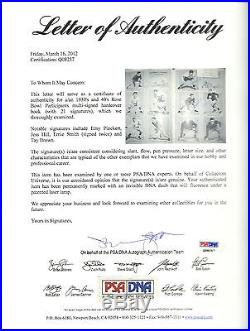 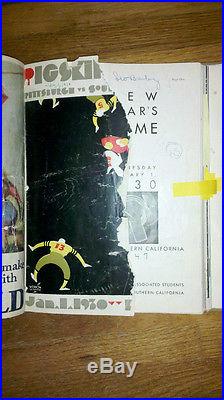 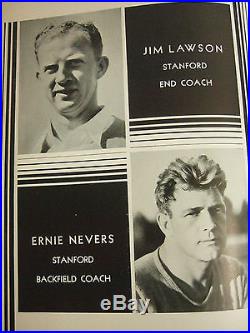 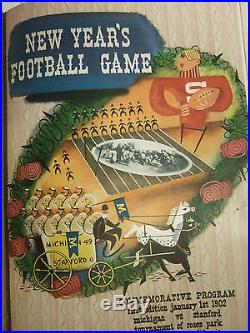 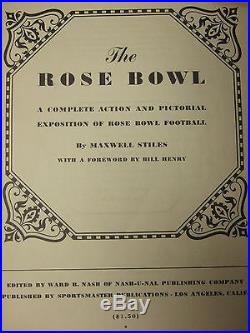 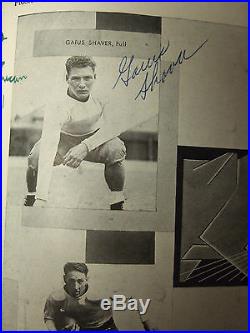 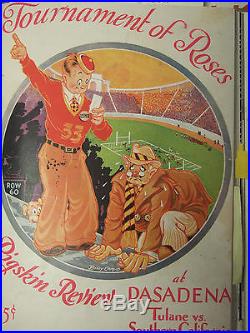 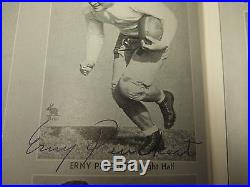 Rose Bowl NCAA Football Programs.. Programs are signed by many All-Americans. Only program missing is 1931... Also included in the bound volumes is a commemorative program from the 1902 Rose Bowl game, as well as a book entitled "A Complete Action and Pictorial Story of Rose Bowl Football" by Maxwell Stiles..

Book is in Good Condition for its age... There are some torn pages (see photo) and lots of annotated pages which actually ADDS to the greatness of this collectible. The fact that these signatures from the 1930s great USC team makes this book invaluable... There are so many fake signatures on the internet... Below is a database of all the signatures within these programs.

By a score of 8-7. The game was notable for a play by California All-American Roy Riegels. In which he scooped up a Georgia Tech fumble and ran towards his own goal line. On the ensuing punt proved to be the margin of victory. Who attempted to tackle Riegels on the run, was named the Rose Bowl Player Of The Game when the award was created in 1953 and selections were made retroactively. Program is in poor condition, with nearly the entire cover torn (see picture), but all other pages are in good+ condition.

Game synopsis: It featured the Pittsburgh Panthers. The final score was 47-14, in favor of USC. Program is in very good+ condition to nearly excellent, with very little wear on cover, some staining, and writing. Contents include signatures from Erny Pinckert, Garrettt Arbelbide, Raymond Sparling, Gaius Shaver, Raymond Brown, and Ernest Smith--all USC players.

Game Synopsis: It featured the Tulane Green Wave. The Trojans had six All-Americans. In their lineup: tackle Ernie Smith, guards Johnny Baker and Aaron "Rosy" Rosenberg. And quarterbacks Orv Mohler and Gaius Shaver. Program is in good+ condition with some wear on cover, creasing, staining, and some tearing.

USC destroyed Pitt, winning the championship 35-0. Program is in excellent- condition with a small scuff on back cover. Program is in amazing condition and has some writing on lineup sheet, but all pages intact otherwise. Here is a GREAT youtube clip from the game. Game Synopsis: The Columbia Lions. The Columbia quarterback, was named the Rose Bowl Player Of The Game when the award was created in 1953 and selections were made retroactively. At 35,000, it has the lowest attendance in the Rose Bowl game since the Rose Bowl Stadium.

This was one of the few rainy New Year's Day celebrations in Pasadena, California. Rain three days before had turned the Rose Bowl stadium into a small lake. Program is in very good+ condition with some minor wear on cover, staining, and some taped newspaper articles/playbook clippings. Here is a great youtube video that showcases all the key plays throughout the game. Game Synopsis: It featured the Alabama Crimson Tide.

Alabama came up victorious with a 29-13 win. Program is in very good condition with some wear and creasing on cover, some staining, and taped plays on pages. Game Synopsis: It featured the undefeated Southern Methodist Mustangs. Stanford upset SMU 7-0 for the school's second Rose Bowl win. Program is in good- condition with lots of scuffing on front cover and some general wear and staining and a large tear, as well as some creased and stained pages.

Here is a great long clip on the entire game. The Rose Bowl seating was increased to 87,677. Pitt went on to win 21-0. Program is in excellent- condition with some wear on cover and taped newspaper clippings on lineup sheet. A great youtube clip of the game can be found here. Game synopsis: The game featured the California Golden Bears. Against the Alabama Crimson Tide. Two of the top teams from the 1937 college football season.

(82) against the Duke Blue Devils. Duke led after an early fourth quarter, 23-yard field goal by Tony Ruffa. However, backup quarterback Doyle Nave. Of the Trojans completed four straight passes to "Antelope" Al Krueger. Who outmaneuvered Eric "The Red" Tipton. Scoring the winning touchdown with one minute remaining. Marked the first points scored against Duke during the season. For his performance in the game, Al Krueger was inducted into the Rose Bowl Hall of Fame in the class of 1995.

Search my store for hundreds of old college and pro football programs and great sports and entertainment memorabilia... We have something for everyone! Check out my other items.

Be sure to add me to your favorites list. Collectibles that stand the test of time. The item "1929-1939 ROSE BOWL PROGRAMS SIGNED ERNY PINCKERT GUS SHAVER PSA AUTHENTIC" is in sale since Monday, May 21, 2012. This item is in the category "Sports Mem, Cards & Fan Shop\Autographs-Original\College-NCAA\Football\Other Signed NCAA Football". The seller is "redstonecollectiblesonline" and is located in Zionsville, Indiana. This item can be shipped to United States.